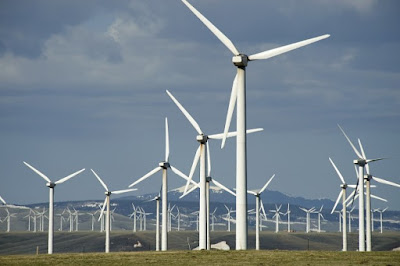 The State of Wyoming claims it owns the wind, and imposes a wind tax on turbine operators.


In a daring feat of mental gymnastics, the Wyoming legislature declared ownership of the wind and imposed a $1 per megawatt wind tax on turbine operators. Now this may not seem like much, and most people would probably remain apathetic for this very reason and because it isn't personally inconvenient for them, but as a matter of principle it should shock the conscience because 1) it voids any concept of property rights 2) it's not too far removed from an Air tax wherein people would be charged for breathing. If the government can sever 'wind rights' from land rights then they can set the precedent for a plethora of useless micromanaging laws. If you want to teach sailing courses for pay, you'll have to pay the wind tax because you're profiting from government wind. If you want to take up windsurfing, fly a kite, or even hang a wind chime, you'll first have to get a permit for permission to use government wind; the potential for abuse is infinite. I have no doubt that the oil lobby is behind this; there is no conceivable benevolent motive and it seems to be too convenient of an excuse to prop up an unwieldy energy monopoly. The solution of course isn't too subsidize alternative energy, as the left would have us believe, but to remove government from the role of choosing winners and losers in the market, and a good place to start would be to eliminate billions in oil subsidies at both the state and federal level.
Posted by Alexander Fayard at 4:15 PM