Political Superstitions (part 6): The President Does Not Manage The Economy 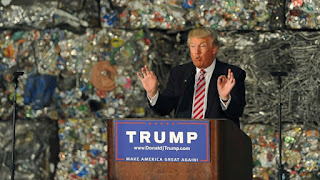 Or at least he's not suppose to, unless you live in a country like Venezuela (in which case I would advise you to get the hell out of there). In fact, the constitution delegates very little to the president; Article II section 2 provides a very short summary of powers and duties delegated to the president:

That's it. The president isn't suppose to be some kind of superhero out to save the world; he's not suppose to create (private sector) jobs, or bring peace to the world, or control gas prices, or help you pay your rent. The president was simply meant to be a constitutional officer who signs bills into law and protects us from foreign and domestic enemies. If Trump had only promised to eradicate ISIS and enforce immigration laws by building a wall on the southern border he would be tops in my books, but like the typical egomaniac he had to promise the moon. He promised to bring back coal mining, bring back manufacturing jobs (which have been on a slight uptick for the past 5 years), and now he wants to bring back apprenticeships. Trump recently signed an executive order to create a White House initiative to expand apprenticeships; the only problem is that it's based on the same fallacious reasoning as his other far fetched promises. It is private companies that generate profits that enable them to expand their businesses and hire more employees or apprentices. Now the president can certainly facilitate this process by cutting red tape and reducing fiscal burdens, but he in no way generates the profits of millions of companies that contribute to economic growth in the aggregate and increase the demand for labor. The president's job, and the function of the federal government as a whole, is to maintain a hospitable environment for the private sector. Trump would have to be omniscient in order to manage the economy. He would have to know the time and circumstances of every transaction, the daily output of every business in primary industry as well as those in secondary industry; he would always need to know final domestic demand, not just in aggregate, but for every consumer and capital good conceivable, including ones that have not been invented yet. He would have to manage thousands of assembly lines, oil wells, retail spaces, mutual funds etc. while also performing the duties assigned to him as president. The truth is that one man doesn't create jobs; millions of market actors pursuing disparate interests create jobs, and to the effect that the president can make this process easier he can be said to be a catalyst for job creation, but he is not creating jobs.

Posted by Alexander Fayard at 5:55 PM