Child Brides In The U.S. 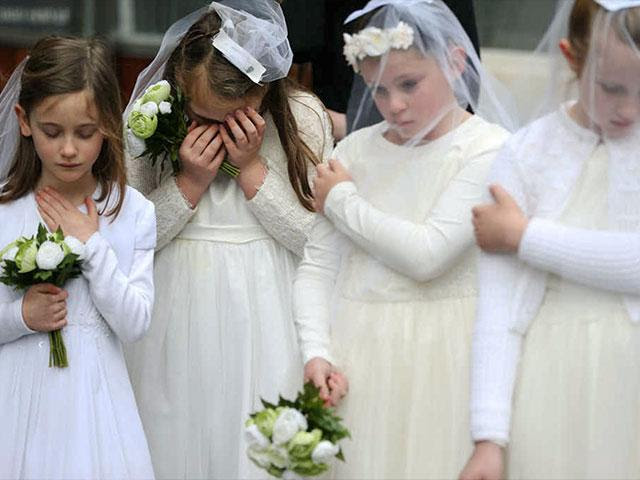 It may come as a surprise to most people that child marriage still exists in a first world country like our own. 167,000 children (defined as persons under 18 years of age) married in 38 states between 2000 and 2010. Unchained could not gather data on 12 states, but estimated the number to be around 250,000 over that decade for all 50 states. As of 2014, 57,800 minors between the ages of 15 and 17 were married according to Pew Research. While child marriage is not common in the U.S., at least not as common as it is in Pakistan where 1/5 of girls marry under the age of 18, neither is pedophila or rape, but it is still a problem. 77% of these marriages (128,590) took place between female minors and adult men. Some marry under the age of consent (16 in most states) to husbands old enough to be convicted of statutory rape if they have sex with them. The number of child marriages has subsided year by year but so has the number of total marriages. Over the same decade, the number of marriages per year dropped from 2,315,000 in 2000 to 2,096,000 in 2010. Most states have set the minimum marriage age at 18, but allow persons younger than 18 to marry with parental consent and/or judicial approval. To put this into context, people under the age of 18 are not allowed to smoke, drink, sign contracts, file suit in their own name, or vote but they are allowed to marry, a decision more permanent and monumental then any of those enumerated. It wouldn't be asking much to demand that state legislatures across the country eliminate the exceptions and make 18 the absolute minimum age for marriage. Making 18 the absolute minimum age would reduce the incidence of parents coercing their daughters into marriage and adult men sexually abusing adolescent girls. Even if there are adolescents mature enough to marry at 17, it wouldn't hurt for them to wait a year, as they are expected to do for other privileges reserved for adults.

Last month, NPR featured a story about a woman who was raped by a member of her church and forced to marry her rapist at the age of 11 in 1971. The details of her story shock the conscience with unimaginable horrors allowed by the state of Florida and every other state in the union to this day.
Posted by Alexander Fayard at 5:15 PM