Conservation is a Pretext For Genocide (part 3): Bushmen Genocide in Botswana 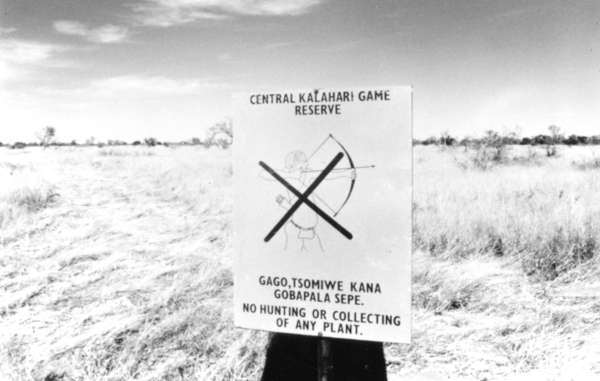 The Bushmen are a group of traditional societies that have inhabited Southern Africa for millennia on end. In Botswana, Central Kalahari Park was established to protect what was left of their homeland after the country gained independence from the UK. However, re-colonization efforts on the part of the Botswana government, diamond mining companies, Conservation NGOs and the World Bank have jeopardized their homeland, culture, and their very existence. The government began forcing the Bushmen out of Kalahari Park and stationed armed guards around it in 1997, under the pretense of conservation. The government destroyed their property and personal belongings, dismantled their schools and trading posts and sealed their boreholes, which they used to obtain water. They were prohibited from hunting and obtaining water causing many of them to die from dehydration and starvation. Those who hunted or gathered food were tortured, beaten, arrested and sometimes killed by the guards. The remainder were put into resettlement camps where they live out a dismal existence plagued by poverty, alcohol addiction, and mental illness.

The government of Botswana is not the sole culprit. Incidentally, diamond deposits were discovered in Kalahari Park prior to the eviction of the Bushmen. The government leased the land to 'eco-tourist' and conservation company Wilderness Safaris, which built a luxury tourist lodge on the land, as well as a handful of diamond mining companies. The mining companies operating in the Bushmen's ancestral land are mostly based out of the UK with one Canadian and one Australian company. Gem Diamonds, based out of London, is perhaps the largest stakeholder in Kalahari Park diamonds. They own the Ghaghoo mine, which has an estimated worth of $5B and diamond deposits valued in excess of $3B. Other mining and exploration companies include Kalahari Diamonds Limited, also based out of London, BHP Billiton, from Australia, and Motapa Diamonds, from Canada. The World Bank, for their own part, provided Kalahari Diamonds Ltd with a $2 million loan to conduct exploration in the area. The World Bank subsidizes other Diamond mining companies like Tosdilo Resources Ltd and in general finances diamond mining as well as other extractive industries throughout Africa, regardless of the cost to human life.

With the insistence of Conservation International, an NGO based out of the US, the president of Botswana, Ian Khama, enacted a nationwide hunting ban in 2014. The hunting ban prohibits the Bushmen from hunting on their own homeland, but allows an exception for trophy hunters that run game ranches, so long as they pay the proper fees. Oddly enough, Ian Khama is a member of the board of directors for Conservation International. Conservation International has partnerships with USAID, the State Department, the Department of Energy, NASA, and NOAA. They receive federal funding through the Development Assistance and Global Environment Facility. The government of Botswana recieves foreign aid from USAID, so in a certain sense the US federal government is complicit in the genocide of the Bushmen.

The resettlement camps have made the Bushmen into a welfare dependent underclass. There is no doubt that the Bushmen are better off as subsistence hunters and gatherers than they are subsisting off of government handouts. Although the hunter gatherer lifestyle is brutal and taxing, it is more dignified than the life of a welfare recipient. The former keeps the senses sharp and the mind attentive while the latter leads to drug and alcohol abuse that dulls the senses and deteriorates the mind. In the former, they have the liberty and self-determination to practice their customs and traditions, while they are always under the heel of the government in the latter. Sure their ways are primitive, but they are still much better than what the government has to offer.
Posted by Alexander Fayard at 4:20 PM