Modern Debtor's Prisons In The US 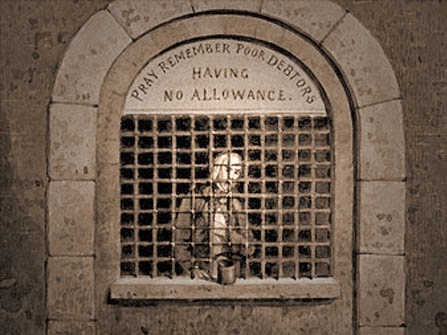 In a sad testament to the backwardsness of the U.S. injustice system, Nora Ann Corda was jailed for 2 months, in Lexington County, Kentucky for not being able to pay $1300 in traffic fines. She lost her job and was renderless homeless as a result of her stay in jail. Nora isn't alone; across the country poor people are often locked up because they cannot afford to pay the legal fines and fees stacked against them. Twanda Brown was also jailed for two months because she was unable to pay $2400 for two traffic fines. She lost her job as a result making her even less able to pay the fines imposed on her. Qumotria Kennedy was jailed for five days in Biloxi, Mississippi because she was unable to pay her traffic tickets upfront and in full as the city demanded. She was fired from her job and rendered homeless as a result. Here in Louisiana, 8 parishes lock people up for being to poor to pay legal fines, and it's not without cause. The perverse incentive stems from the practice of funding parish and city courts with the fees they collect instead of tax revenue, driving up penalities for traffic violations and making them less affordable for lower income violators. But locking someone up because they cannot afford the fines imposed on them is immoral, unconstitutional, and counter productive to the government's objective. It is contrary to the principle of beneficence to destory someone's life over a traffic violation, and that is the unintended effect of these policies. When people are jailed for months on end for being unable to pay the fines imposed on them they lose their jobs and often their homes leaving them destitute and on the brink of starvation upon release, which is a cruel and unusual punishment in proportion to their alleged violation. The Supreme Court also outlawed imprisoning people for not being able to pay fines in Bearden v. Georgia:

The State may not use as the sole justification for imprisonment the poverty or inability of the probationer to pay the fine and to make restitution if he has demonstrated sufficient bona fide efforts to do so. Pp. 461 U. S. 669-672.

And it is without question counter productive to the government's objective of having them pay the fine. If they cannot pay the fine before being thrown in jail, they definitely won't be able to pay it after being put in jail and losing their job. The cause of their contempt of court will just be exercerbated and the government will end up spending more on them, keeping them in a homeless shelter, than what they owe, but that is the price paid by incompetent, low iq public officials who can't think two steps ahead.
Posted by Alexander Fayard at 4:42 PM