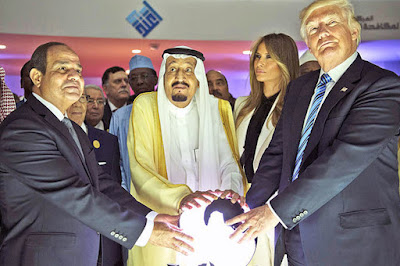 Trump's 'spiritual advisor' believes God has given him the authority to start a war on his own. The original article is DALLAS PASTOR: TRUMP HAS MORAL AUTHORITY TO KILL NORTH KOREAN DICTATOR. It's straight foward and doesn't go into any analysis which I plan to do here.

This sentiment certainly has an emotional appeal and I can see why simple minded folk would find it agreeable, but morality must be derived through the use of logic and rationality not feels and dubious claims of divine inspiration. Firstly, governments and their many offices have no moral authority for the same reason they have no mathematical authority or biological authority. Mathematical facts, moral facts, and biological facts are true whether the government sanctions them or not. The government cannot make a triangle have four sides anymore than they can make murder, theft and enslavement morally permissible when it suits their objectives. The government, and all other institutions people create, must be subordinate to moral law just as much as they are subordinate to mathematical laws, not the other way around. The reverse would lead to a moral subjectivism where morals are contingent upon who holds the nuclear codes and would envitably result in contradictory truths. Secondly, the Constitution, with its origins in the English constitutional tradition that goes back to the middle ages, enumerates a very short list of powers delegated to the excutive office; starting a war isn't one of them. Only congress has the power to declare war, and for a very good reason; they also have the power of the purse. Wars cost money, trillions to be exact, and the president cannot initiate any public spending, otherwise he would just be a dictator.

Using God to justify any act of government is always a dangerous ploy. This pastor has implied much more in his statement than he is willing to let on. The inescapable conclusion of such a premise is that the president is infallible (basically papalism for the federal government). What the pastor describes is reminiscent of an ancient superstition called the divine right of kings, the central doctrine of absolute monarchy. It is fitting that the pastor would impute divine authority in Trump during an era where the powers of executive office have been expaned beyond their constitutional restrictions and the federal government has inched closer to totalitarianism every year.
Posted by Alexander Fayard at 5:29 PM