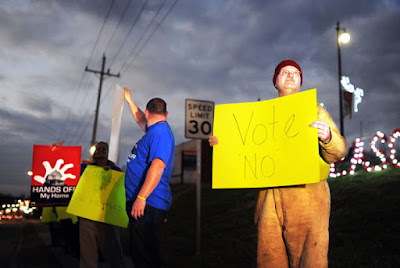 The following story is a follow up report about the use of emeinent domain to take houses from low income residents in Charlestown, Indiana and give them over to private developer Neace Ventures at the lowest cost possible. To catch up on this developong story read The Red Tape Times (article 20).

At the end of August, the Institute for Justice leaked a series of documents which contained the correspondence among Charlestown mayor Bob Hall, city inspector Tony Jackson, city attorney Michael Gillenwater, and Neace Ventures project manager John Hampton, from last year. The documents showed that the aforementioned city officials had colluded with Neace Ventures in lowering home appraisals in their endeavor to make using eminent domain against any 'holdouts' as cheap as possible for the developer. Their scheme was to use the city's property maintenance codes to stack fines against Pleasant Ridge homeowners and allow Neace Ventures subsidiary, Pleasant Ridge Redevelopment LLC, to buy up vacant lots from the city, further driving down home values in the neighborhood. Once the accumulated fines became over burdensome for the homeowners, the city would swoop in and offer to buy their house for $10,000, well below market value, in return for voiding the fines imposed on their property. The only other option offered was to raze their houses. As reported previously, the city inspector and mayor violated municipal, state and constitutional law in the process 1) by not notifying residents beforehand to allow corrections 2) imposing immediate accumulating fines 3) taking property without just compensation and for the exclusive use of a private entity, and 4)imposing fines without allowing homeowners to appeal the fines in a civil hearing. The leaked documents reveal that mayor Bob Hall, attorney Michael Gillenwater and project manager John Hampton planned to railroad the project through as early as July 6th of last year even though Bob Hall claimed ignorance of the project to the press the next day and told WAVE3 TV, at the end of September, that eminent domain wouldn't necessarily be used. Even before the July 6th meeting between Bob Hall and John Hampton, the mayor reached an indemnification agreement with Pleasant Ridge Redevelopment LLC, promising to compensate them for any lawsuits. What's more, the city inspector, Tony Jackson, profited from the project by doing contract work on the side removing asbestos from condemned houses. It is doubtful that any of the conspirators in this robbery will ever be criminally indicted much less face prosecution. As long as the order of the day is one set of laws for us and a separate, less strigent set of laws for politicians and bureaucrats they will continue to ruthlessly prey on their own citizens.

Posted by Alexander Fayard at 5:12 PM