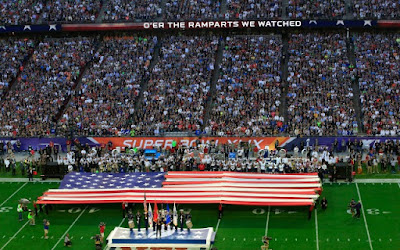 Initially, I didn't plan to respond to the trivial debate raging on social media over what position football players should assume while the national anthem is being played. In my opinion, their only offense is being attention whores. I couldn't care any less about the ritual protocols Trumpbots have established for us. That being said, there is a real story under the veneer of virtue signaling and patriotic hand waving. If you are cognizant of recent history, you know that NFL players did not stand for the national anthem prior to 2009; in fact, they didn't even leave the locker room. The NFL's recent interest in promoting patriotic fervor, over the course of the last few years, is largely an advertising campaign paid for by the Department of Defense. Back in 2015, senator Jeff Flake revealed, in an investigation into wasteful spending, that the Department of Defense, through the Army National Guard, had established multiple advertising contracts with various teams for ad space and other marketing services. The Department of Defense doled out a total of $6M to 16 NFL teams between 2011 and 2014 (it probably began in 2009) for such things as big screen announcements like the Hometown Heroes segment and a kickoff video message from the National Guard as well as events like annual team luncheons that include photo ops with the players and charity events hosted by the teams. One of those 16 teams was my home state's own New Orleans saints. From 2011 until 2014, the Army and Louisiana National Guard paid Tom Benson's franchise, which is already subsidized by Louisiana taxpayers, $572,875 for fulfilling their advertising contract. Other franchises that contracted with the National Guard included the New York Jets, the Atlanta Falcons, the Baltimore Ravens, the Buffalo Bills, the Cincinnati Bengals, the Cleveland Browns, the Green Bay Packers, the Indianapolis Colts, the Kansas City Chiefs, the Minnesota Vikings, the Pittsburgh Steelers, the St.Louis Rams (for one year), the Dallas Cowboys (for one year), the Miami Dolphins (for one year), and the San Francisco 49ers for a year. The most disturbing part of this story is not the fact that the patriotic pony shows resulted from a business deal between the NFL and the federal government as an effort to recruit more soldiers and retain those already enlisted, but that the general public is blissfully ignorant of it. And that is the problem with America, most people don't know what their government does with their money. As long as Americans are accustomed to straining at gnats and swallowing camels this won't change.
Posted by Alexander Fayard at 4:08 PM