Want To Boycott the NFL? Too Bad Your Government Forces You To Support Them. 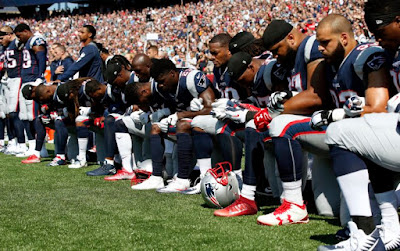 'As, on the one hand, it is certain that we all address some such request to the state, and, on the other hand, it is a well-established fact that the state cannot procure satisfaction for some without adding to the labor of others, while awaiting another definition of the state, I believe myself entitled to give my own here. Who knows if it will not carry off the prize? Here it is: The state is the great fictitious entity by which everyone seeks to live at the expense of everyone else.'

- Frederic Bastiat, The State
Yep, if you are a taxpayer, you are forced to pay for NFL teams and their stadiums at both the federal and state level. If you haven't already, please read my previous post The DOD Paid NFL Teams For Patriotic Pony Shows as it provides some context for what I'm about to tell you. It turns out that the $6M in advertising contracts is just the tip of the iceberg. Since 2000, $3.2B in federal tax-exempt municipal bonds have been used to finance the construction and renovation of 36 Sports Stadiums. Overall, NFL teams have received $7B in government aid over the past couple of decades. Just to give you a glimpse: the Patriot's Gillette stadium cost Massachusetts taxpayers $72M; the Steelers' stadium cost Pennsylvania taxpayers $171M; direct subsidies to the Colts cost Indiana taxpayers $619M, and the New Orleans Saints will cost Louisiana taxpayers $400M in direct and indirect subsidies between 2012 and 2025. Proponents of stadium subsidies claim that they are public investments, which generate additional growth in local economies, but this is simply the broken window fallacy writ large. Robbing Peter to pay Paul never creates wealth. The revenue that is redistributed to the franchise and businesses within its proximity must be taken from businesses where people would otherwise spend their money or save it and allow it to be lent out for other purposes (perhaps as loans to start a new businesses). Government redistribution is sum zero; it does not create any wealth of its own.

Posted by Alexander Fayard at 7:41 AM