You Cannot Be Fiscally Conservative And Support Perpetual Warfare Abroad 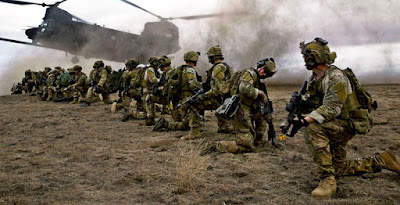 This point is obvious to anyone who has two brain cells to rub together. If you have any basic understanding of history and economics you know that governments go into debt when they wage war; usually borrowing the funds by issuing treasury bonds. This is why the United States has had a public debt for the vast majority of its history; it has always been at war. Of course, the advent of the welfare state in the 1930's and 40's, which was in part a byproduct of war (as well as the great depression) made it worse. As of now the national debt has surpassed $20 trillion, or about 104% of GDP, with interest exceeding $268B, about 7% of the budget, and a budget deficit nearing $700B. This resulted from the combined efforts of big government democrats and 'small government' republicans. Remember that next time you go in a polling booth. As of 2016, the wars in Iraq and Afghanistan have cost a total of $5 trillion, and by now are probably near $6 trillion with interest. That would be about 30% of the national debt. With the Trump admin escalating the war in Afghanistan, sending more troops into Iraq, Syria, and Yemen and eyeing Venezuela, the war debt will likely grow larger as a proportion of the national debt. And with the Trump admin looking to increase the DOD budget to more than $700B, perhaps it will even eclipse medicare in total cost.

The national debt in itself is not what should concern us. There will never be a time when the federal government's creditors, mostly wall street banks and foreign governments, will go door to door asking citizens to cough up their share of the national debt. There will also never be a time when the federal government defaults on its debt, regardless of how large that number grows. Unlike a private business that goes into debt, there is no fear of defaulting because your labor is their collateral. As long as you can be forced to toil on their behalf and pay for expenses they incurred, they have nothing to lose; they have no skin in the game. It's a win-win for the politicians, the defense contractors, the Wall Street Bankers, and the rest of the pyschopathic plutocrats that live at the expense of the common man. The growing debt is profitable for them, but not so much for you John Doe. You see serfdom was never abolished; it just became more efficient.

'As long as mankind continue to pay "national debts," so-called -- that is, so long as they are such dupes and cowards as to pay for being cheated, plundered, enslaved, and murdered -- so long there will be enough to lend the money for those purposes; and with that money a plenty of tools, called soldiers, can be hired to keep them in subjection. But when they refuse any longer to pay for being thus cheated, plundered, enslaved, and murdered, they will cease to have cheats, and usurpers, and robbers, and murderers and blood-money loan-mongers for masters.'


-Lysander Spooner, No Treason: The Constitution of No Authority VII

Posted by Alexander Fayard at 5:54 PM