A License To Speak (part 1) 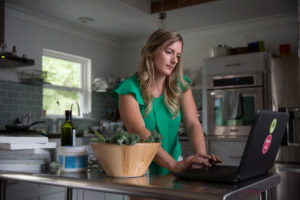 In some states it is illegal to offer dietary advice without the government's permission. Florida resident, military spouse and health coach Heather Kokesch Del Castillo learned first hand how far state's will go to protect their cartelized industries. In this instance, she ran up against the Dietetics industry and the state was willing to censor her. Heather moved from California to Florida in the summer of 2015 after her husband, who is in the Air Force, was transferred to a base in Fort Walton Beach. Heather earned a private health-coaching certification in 2013 from the Institute for Integrative Nutrition. The state of California did not require Heather to become a licensed dietetician to give diet advice to willing clients, but Florida's Dietetics and Nutrition Practice Act defines 'dietetics' so broadly that it inlcudes offering any dietary advice for compensation. The Florida Department of Health first contacted Heather when they conducted a sting operation against her. One of their agents emailed heather pretending to be a man named Pat Smith who was looking for information that could help him personalize a weight loss program. In response, Heather offered him a free consultation and asked for his health history. The agent was not charged for any of the information provided to him and he was not solicited to buy anything from her. Heather does not sell supplements, perform diagnostic procedures, or claim to be a licensed dietetician. Her health coaching practice only involves talking to clients, on an individualized basis, about their food choices for compensation. She helps them sift through information that is already available to the public online. The Florida Department of Health subsquently issued a cease and desist and fined Heather $750 for giving dietary advice without a license. In order to continue her Health coaching service, Heather would have to spend 4 years getting a bachelors in Nutrition Science, complete 900 hours of internships, and pay $200 to take a board certified exam, but Heather has neither the time nor the money it would take to meet the state's requirements and neither does the vast majority of the population.

Similar cases have arisen in other states. Perhaps the worst example occured in North Carolina back in 2011 when the Board of Dietetics threatened a paleo blogger with imprisonment if he didn't stop offering dietary advice on his website or even through emails and phone calls. The blogger in question did not even demand compensation for his writing, he was simply offering his experience with different foods and supplements. If talking about food is restricted speech it is not hard to conceive that the government could place more contentious subjects behind licensing barriers. The recent fake news and Russian meddling hysteria, originally orchestrated by the Democratic establishment against the alternative media, offers ample opportunity for state governments to find fertile ground for the censorship of critics via licensing requirements.

Posted by Alexander Fayard at 10:14 PM