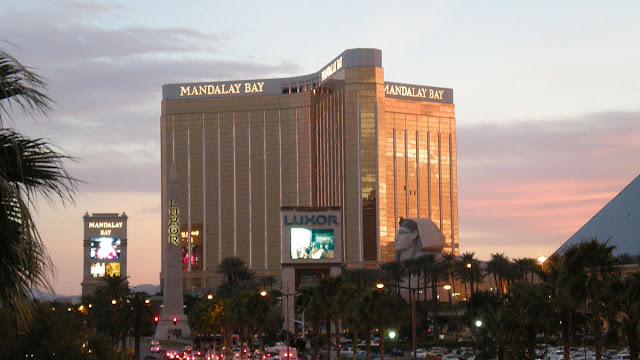 And it still doesn't add up. According to the Las Vegas Metropolitan PD, Stephen Paddock shot a security gaurd and fired at a builing engineer, on the 32nd floor, 6 minutes prior to opening fire on concert goers across the street. Security guard Jesus Campos and building engineer Stephen Schuck were on the 32nd floor prior to the shooting. Schuck had supposedly gone to the 32nd floor to check on a fire exist door that wouldn't open.

Stephen Schuck, a building engineer at Mandalay Bay, on Wednesday told NBC News Today show he was on a higher floor the night of Paddock's rampage when he was called to check on a fire exit door that would not open. He said the hallway on the 32nd floor where Paddock was holed up was quiet when he arrived.About a third of the way down the hallway and I started to hear shots go off, Schuck said, although they apparently were not directed into the hallway. Security guard Jesus Campos yelled to take cover moments before Paddock started shooting into the hallway, Schuck said. I could feel them pass right behind my head," Schuck said. "Something hit me in the back and I took cover.Campos was shot in the leg. Schuck radioed to his supervisors to call police. Sheriff Joe Lombardo said Monday that the hallway shooting took place at 9:59 pm local time — six minutes before Paddock began his 11-minute assault on the 22,000 people gathered for a country music concert a few hundred yards from his hotel windows.

Immediately, this raises a red flag? If Paddock had wanted to take out as many people as possible, which it seems he did, he would have taken out any security that could spot him beforehand and foil his planned rampage. Why would he allow them to live and radio their supervisors? We also aren't told what hit him in the back. There is no implication he was injured so that part of his story is an anomaly. Another anomaly is that he describes the shooting as 'apparently not being directed into the hallway, but contradicts his previous statement by saying it was when Campos told him to take cover. While private rooms don't have security cameras hallway entrances and other common areas do; the hotel should have time stamped footage of this hallway shooting. Since they contend that it happened after the mass murder, contrary to the new police timeline, it would seem even more imperative for them to release this footage if their narrative of events is correct. As a side suggestion, maybe MGM should start arming their security guards.
Posted by Alexander Fayard at 5:35 PM