TJ Kirk, formerly known as the amazingatheist in the haydays of the evolution-creationist debates on Youtube, put forth the following question, presumably to conservative christians.

This is a test to find out if you're a hypocrite. If a Christian baker doesn't want to bake a gay wedding cake, is that their right? I say it's not. Maybe you say it is, but that's not the test. This is the test: gay coffee shop owner kicks christians out of cafe, goes on vulgar rant. Do you think this gay coffee shop owner has the right to kick Christians out of his establishment just for being christians? If you're answer for this is different than your answer to the previous question, you've tested positive for being a fucking hypocrite. In my view businesses don't have the right to discriminate on the basis of religion or sexuality in either direction.

The question is based on a false premise though. The gay coffee shop owner in question kicked them out over anti-abortion flyers they had been handing out prior to entering his establishment, not simply because they were Christians. From the UK Mirror:

'A cafe owner kicked a group of Christians out of his coffee shop because he was 'offended' by their leaflets calling for the abolition of abortion.

Members of the Abolish Human Abortion group decided to take a break from leafleting at Seattle's Bedlam Cafe, but when the owner realised who was drinking in his shop, he reacted furiously.

Ben Borgman told the group to leave because he is gay .

Asked if he is denying them service, he says "yes".

He continues: "This is offensive to me. I own the place. I have the right to be offended
"Do you tolerate my presence?

"If I got my boyfriend and f*** him right here would you tolerate it?"

The group members respond by saying they would tolerate it, and saying it is his choice, and point out that they have gone into his shop without making a fuss.

The coffee spot is decorated with the LGBT rainbow flag outside.

But that does not calm the furious Mr Borgman and he tells them they, and any of their friends, are not welcome.

The leaflet in question depicted rainbow colored hands dripping blood over a dismembered fetus and read 'This is the truly oppressed person in our Idolatrous culture of death.' 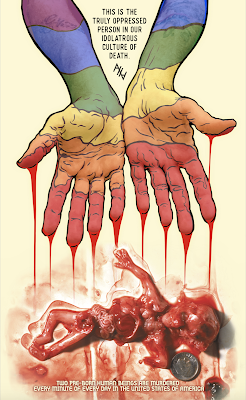 It's easy to see how Mr. Borgman could have taken offense to the flyer as it seems to convey the message that gays are responsible for abortion which the Christian group equates to genocide. Also, Christian bakers don't refuse service to gay customers just for being gay; typically, it's a conscientious objection to baking a cake tailored to a gay wedding e.g. with two grooms on top. Most wouldn't mind giving them a plain cake for them to decorate themselves.

And what is a right? Liberals don't seem to have a working definition for the term 'rights' and much less so a coherent theory of ethics. When they use the term 'rights', it usually means a gibsmedat e.g. I have a right to food, a house, a phone, free beer etc. and the rest of their argument is filled in with vacuous appeals to emotion and ad hominems.
TJ's thought experiment is at best a naive musing about something that could only occur in an ideal world with perfect justice; the stark reality is that all laws are either selectively enforced or not enforced at all; in the former case someone always gets the short end of the stick. Governments are nearly always discriminatory in enforcing their laws; sometimes its along ethnic and religious lines and other times its in favor of other public officials. Adding further laws tends to create more legal inequalities. This is readily noticeable with so called anti-poaching laws. Actual poachers and criminal syndicates involved in the ivory trade usually have enough money to bribe public officials. The indigenous tribes that hunt for subsistence do not, so they end up getting nailed for poaching. The short answer is that you shouldn't patronize people who hate you on the basis of whatever arbitrary categories you listed. Why would you support people who are against your existence? Bakeries and coffee shops are a dime a dozen, if one of them refuses you, go around the block and find another one.
Posted by Alexander Fayard at 4:29 PM