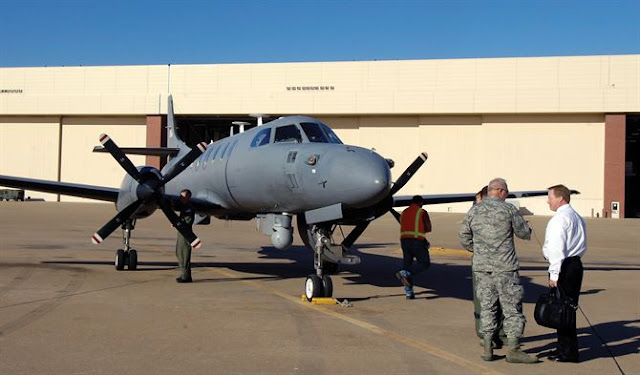 Last year, the Texas National Guard spent $373,000 in asset forfeiture funds to install stingray devices, called DRT boxes, on two RC-26 surveillance planes. For anyone unfamiliar with the subject, stingrays, also known as cell site simulators, are used to track people’s locations by intercepting their cell phone signals. The higher end ones can even be configured to eavesdrop on people’s phone calls and pickup the content of their text messages. The problem with law enforcement using this technology is that it doesn’t just target ‘the bad guys’ they’re looking for. Stingrays intercept every cellphone within a ⅓ mile radius. It’s a form of dragnet surveillance that treats the perps and innocent bystanders the same. This presents a challenge to two of our fundamental constitutional rights: our 4th amendment right to not be subject to arbitrary/warrantless searches and our 6th amendment right to know the nature of the charges and the evidence used against us. You see, stingray devices don’t just allow police to conduct dragnet and in many instances, warrantless surveillance, it also creates a dilemma for prosecutors who have to use the evidence gathered through these devices in court. As I noted in America’s Secret Police Unveiled (part 1) state and municipal law enforcement agencies get these devices through federal grant programs such as those run by the DOJ and DHS. As a condition of using this technology, state and municipal law enforcement agencies must adhere to non-disclosure agreements, which forbid them from revealing any information concerning the purchase or use of stingray devices to the general public, including during the course of criminal trials. As you can already guess, abiding by these non-disclosure agreements would entail either omitting the evidence entirely or using the evidence in a backhanded manner that keeps the defendant in the dark about the totality of the circumstances used to convict him, which is a violation of his 6th amendment right to know the nature of the charges and evidence used against him.

The problem with the military using this technology against U.S. citizens is even worse. The framers of the constitution knew all too well from history that civilian oversight of the military was crucial to preventing a military junta from taking over. In this case, the DRT boxes were supposedly used for counternarcotics operations in conjunction with the DEA, but the vice chairman of the Texas House committee that oversees the Texas National Guard didn’t even know they had been purchased. What’s more, these DRT boxes are the higher end stingrays I mentioned earlier that can be used to eavesdrop on phone calls and pickup text message content. So we potentially have a situation in Texas where a military force is conducting warrantless surveillance against U.S. citizens, because there are no policy guidelines on how and when they can be used.

Posted by Alexander Fayard at 7:36 PM