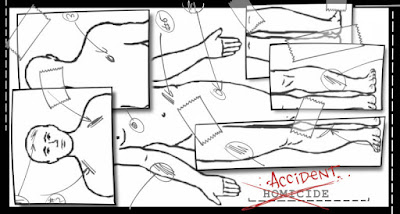 Former chief forensic pathologist for San Joaquin County, Dr. Bennet Omalu, has alleged, along with his former colleague Dr. Susan Parsons, that Joaquin County sheriff/Coroner Steve Moore interfered with his work to cover up wrongful deaths that occurred in police custody or during the course of an arrest. The day before his resignation, he released a series of documents that reveal, among other things, that the sheriff labeled certain deaths in police custody as accidents rather than homicides, even when the evidence pointed to the latter, and withheld evidence of police using excessive force against suspects from Dr. Omalu. In one such instance, the California Highway Patrol withheld a taser report from Omalu in the case of Daniel Humphrey’s death. Omalu had originally attributed Humphrey’s death to a head injury he incurred while fleeing arrest on his motorcycle. It was not until two years later, when the deputy district attorney shared the taser report with him, that he learned that CHP had tasered the man 31 times. The sheriff had access to this report the day after Humphrey’s death. The sheriff would often ask Omalu to change the manner of death on his internal worksheets in cases where people had died after officers used tasers and chokeholds to subdue them. In another case, Abelino Cordova Cuevas was killed in a confrontation with Stockton police, who denied using a chokehold against the suspect. However, Omalu discovered that the man had died from asphyxiation and blunt force trauma, but the sheriff certified the death as an accident. The sheriff pulled the same stunt in the death of Filiberto Valencia, a schizophrenic man who broke into a group home and boarded himself in the bathroom. Stockton police beat him, sat on him and tased him, but the sheriff blamed his death on civilians. Similarly in the death of Samuel Augustine Jr, Omalu found that the man had suffered a traumatic brain and spinal cord injury during a confrontation with Stockton Police. He reported the manner of death as a homicide, but the sheriff objected and ruled his death an accident anyway.

Putting the sheriff in charge of coroner’s office creates an obvious conflict of interest, but it’s a common practice in California. California has taken police investigating themselves to a whole new level of stupid. In 50 of the 58 counties, the Sheriff also serves as the coroner and has the final determination over the manner of death. This confused me when I first heard about this story from Studio News, as I’m use to the Sheriff and Coroner being two different people. Even in a state as corrupt as my own, this sort of arrangement would never be allowed.
Posted by Alexander Fayard at 7:12 PM