Conservation Is A Pretext For Genocide (part 8) 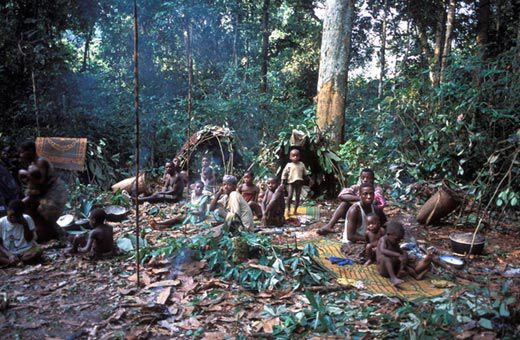 Read: Pygmies in the Congo treated like pets, Slaves of the Congo, The Pygmies Plight

The last article was written by a foreign correspondent for the Smithsonian about a decade ago, but the information he provides in his first hand account is still relevant today. Since the French colonial era, pygmy clans in the Congo basin have been gradually forced out of their ancestral forests, which they are adapted to living in, and into villages inhabited mostly by Bantu tribes. As a result of being dispossessed of their land and forbidden to hunt or forge in the newly designated ‘protected areas’, pygmies live in extreme poverty. Their only option to survive is to perform hard labor for Bantu landlords for next to nothing in compensation, although a few enterprising clans have made a meager living growing cannabis, which is illegal in countries like the Central African Republic, Cameroon and the Republic of Congo. Even though slavery is illegal in all African countries (on paper), the Bantu landlords treat the pygmies like property and give them only enough subsistence to keep them alive. Instead of eating bushmeat and wild herbs as they had done when they occupied the forest , the main staple of their diet now consists of a starchy plant called cassava root. This diet provides very little protein and has resulted in increased malnutrition and the outbreak of disease among pygmy clans, which has taken a toll on their numbers. European ‘human rights’ observers have acknowledged all of these problems to some extent, but they have failed to acknowledge the role their own civil societies and governments have played in creating them. Illegal logging and civil war have certainly played a role in forcing pygmies out of the forest, but so has the creation of so called ‘protected areas’ and national parks, which has been done, in no small part, with enticement and financing from USAID, the EU, the World Bank, as well as multi-billion dollar conservation groups like WWF and WCS.
Posted by Alexander Fayard at 6:38 PM