In aggregate, municipal governments across the state spent a combined $42.7M covering up a range of police misconduct, from wrongful deaths and false arrests as well as use of excessive force and sexual assault, over the past decade. These New Jersey cities used a litany of secret settlements and out of court non-disclosure agreements with the victims to deny wrongdoing and keep their constituents in the dark about the ‘few bad apples’ on the force.

Often these lawsuits are settled before a jury can resolve the critical question of facts – was excessive force used or were the officer's actions justified? After a citizen files a lawsuit, lawyers for both sides and the judge frequently agree that police documents reviewed in the case will be kept secret, preventing public scrutiny of an officer's history. 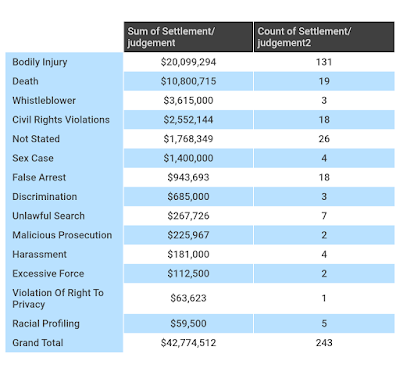 Over the course of their two year investigation, Asbury Park Press reviewed 30,000 pages of legal and internal affairs documents, that reveal a history of badge abuse and subsequent cover ups that included 19 wrongful deaths, 130 injuries, and 7 sexual misconduct cases. Often, internal affairs didn’t even investigate complaints of police misconduct and abuse. Out of the 64,353 complaints filed since 2011, 37,470 have been thrown out and 7,674 are still pending. When police misconduct does lead to a settlement, the accused officer sometimes remains on the job.

Of the 531 officers named in suits alleging abuses, at least 231 remain on the job after their employer settled with their accusers, a Press review of employment records found. Many others normally retired years after an allegation.

This happened in the case of Sterling Wheaten, who despite costing Atlantic City $4.5M in 5 lawsuit settlements, remains on the force with a chusy annual salary of $108,548.

Still others were allowed to abuse their power for years before finally being brought to justice, such as in the case of Sgt. Philip Seidle.

Neptune Police Sgt. Philip Seidle has an internal affairs record that tops 600 pages and spans two decades, with several complaints known to involve domestic disputes between him and his wife. He was considered enough of a risk to the public that his service weapon was taken from him, but he was later rearmed. He used that gun to fatally shoot his ex-wife in 2015 in the middle of an Asbury Park street, in front of their 7-year-old daughter.

There is also the slightly less disturbing case of Jersey City cop MD Khan, who was arrested for assaulting his brother-in-law in 2016 but only received a 40-day suspension as a result. In the following year he assaulted another innocent man that got caught in a high speed car chase.

The June 4, 2017, chase ended tragically for Miguel Feliz, 28, an innocent victim caught in the mayhem. The father of a 6-year-old was driving home from his Peapod grocery delivery job when the suspect ran Feliz's aging Toyota off the road. The car burst into flames after slamming into a utility pole. With his clothing on fire and choking on the acrid smoke, Feliz needed help from the police. He got Khan. Khan and another officer kicked Feliz as he laid burning on the ground. Feliz was struck in the face, a cellphone video shot by a passerby showed. Months later, both officers were indicted on aggravated assault charges. The officers have pleaded not guilty.

Naturally this is what happens when you allow the police to investigate themselves. Sure, requiring settlements to be publicized might make police misconduct more transparent and requiring police to be licensed might disincent this behavior but It won’t stop the bleeding. Our form of government is supposed to be based on checks and balances of power. Oversight of the police department shouldn’t come from the same police department. This would be akin to the president having his cabinet investigate him during an impeachment trial. Oversight of executive officials should come from an independent elected body that has the power to subpoena the police department, just as it does at the federal level.

Posted by Alexander Fayard at 6:40 PM