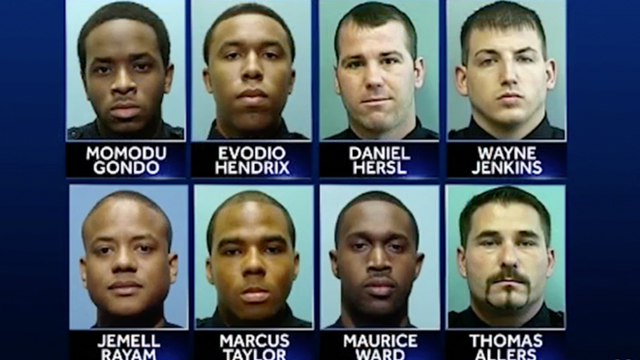 The ongoing trial of two Baltimore police officers, detectives Daniel Hersl and Marcus Taylor, has revealed a plethora of shocking testimony from convicted cops and other witnesses about the crimes of a specific unit of the Baltimore Police Department known as the Gun Trace Task Force. Eight police officers and one bail bondsman have been implicated in crimes ranging from burglary via warrantless searches of the property of drug dealers to racketeering and drug trafficking. Sgt. Wayne Jenkins, who pleaded guilty in a federal racketeering case, was the supervisor of the task force. According to bail bondsman Donald Stepp, Jenkin’s partner in crime, the task force was set up for the sole purpose of covering up their criminal activity.

Stepp said Jenkins told him the Gun Trace Task Force was a group he had hand-picked to be a “front for a criminal enterprise.” He also said there were other officers from other units working with Jenkins, but he did not name any on the witness stand.

Stepp’s role in this gang was to resell drugs that Jenkin’s squad had taken from dealers throughout Baltimore as well as assist Jenkins in robbing them of cash.

Stepp said that in April 2015, during the riots that followed the death of Freddie Gray, Jenkins walked into Stepp’s garage carrying two garbage bags full of looted pharmaceutical drugs.

There is also a little mentioned detail about the task force carrying replica guns to plant on innocent people they might ‘accidentally’ kill during their crime spree. I would be willing to wager that this isn’t an isolated incident.

Ward said the unit’s supervisor, Sgt. Wayne Jenkins, instructed the officers to carry replica guns to plant if they found themselves in a jam. Police recovered a replica gun from the glove box of Taylor’s vehicle after he was arrested last year. The gun, shown to jurors, is nearly indistinguishable from Taylor’s service pistol

I will continue to update this post as the trial is still ongoing.

Posted by Alexander Fayard at 5:25 PM