This is Who Trump Wants To Sell Weapons To 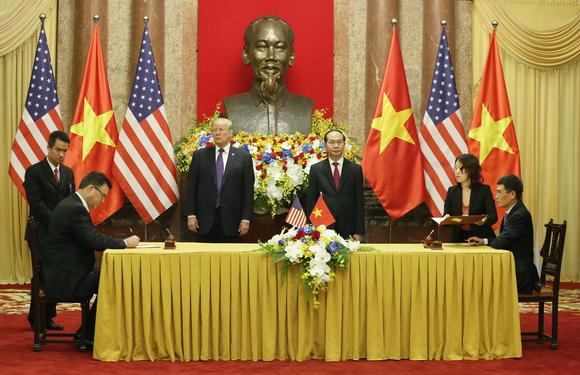 Communists and capitalists are laughing all the way to the bank while their useful idiots argue over the trivial details of their respective fiefdoms.

During the APEC conference in Hanoi last year, Trump aggressively tried to sell U.S. missiles to Vietnam’s communist regime and oversaw the signing of two memorandums of understanding between Vietnam’s state owned gas company, PetroVietnam Gas, and two American gas companies: AES Corp and Alaska Gasline Development Corp. These events transpired as the result of Obama lifting the arms embargo against the country in 2016. Relations between the two governments have been thawing after the collapse of the Soviet Union. Congress began providing foreign aid to Vietnam in 1991 and Clinton ended the trade embargo against Vietnam in 1994. USAID currently spends about $68M per year on the country (as of FY 2016).

We are once again met with crickets on Capitol Hill in the face of intolerable human rights abuses, but since they are being committed by a government that currently has profitable business partnerships with major U.S. industries, they apparently don’t matter. Of course, the same could be said of the Chinese government’s persecution of religious minorities and organ harvesting of political prisoners.

On February 6th, Hoang Duc Binh was given a 14 year prison sentence for the heinous crime of vlogging about and protesting the government’s hesitant response to the 2016 Formosa chemical spill, or as the kangaroo court put it ‘slandering authorities and abusing democratic freedoms to infringe on state interests (in the same way that a slave may infringe on the interests of a slaver). During the same trial, a fellow activist was given a 2 year stint for ‘opposing officers on duty’. Six other activists have also been convicted of similar thought crimes related to the chemical spill. Perhaps the most famous case, which received temporary corporate media coverage, was that of journalist Nguyen Ngoc Nhu Quynh, who went by the pseudonym Mother Mushroom. She was sentenced to 10 years in prison in connection to her coverage of human rights abuses and environmental issues in Vietnam. Since Trump doesn’t really believe in free speech I doubt he would take issue with anything the communist regime has done. He probably wishes he could emulate that here, but for now he is consigned to calling unfavorable coverage of himself fake news and threatening to revoke broadcasting licenses on twitter.

Posted by Alexander Fayard at 4:47 PM