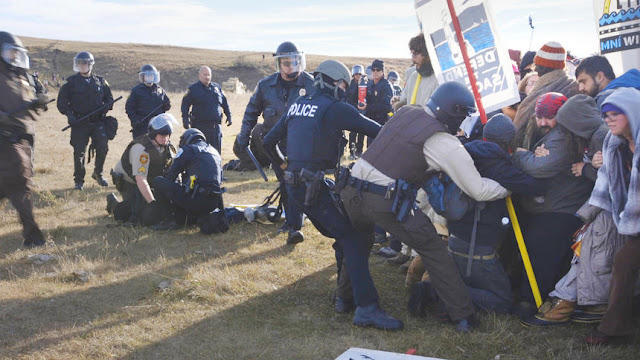 Six of the ten journalists arrested during the Dakota Access Pipeline protests in late 2016 early 2017 are still awaiting criminal trial in Morton County, North Dakota. Jenni Monet, a journalist who does freelance work for multiple news outlets and is one of the six still awaiting trial was charged with criminal trespass and rioting, but has yet to receive her arrest report. She was arrested while leaving a protester camp, strip searched and held for thirty hours in a chain link cage with 19 protestors. Her cohort, LaFleur-Vetter, who does photography for the Guardian, was arrested on similar charges on October 22, 2016, while filming a prayer march, but has since been acquitted. This brings up two concerns: the sixth amendment guarantee of a speedy trial and most importantly the first amendment guarantee to freedom of the press. Don’t get me wrong. I am not under any delusion that the federal and state governments will actually honor their “social contract” with us. That is an article of faith I no longer believe in. I brought this up because it demonstrates that we are worse off than what we imagined. All of the journalists arrested were freelance journalists who actually covered the protest. The local journalists who stayed behind police lines and stuck to the official government narrative were left alone. Sure they were trespassing on government property, a particular piece of land claimed by the Army Corps, but the federal government claims to own 30% of the continental land mass and state, municipal, and county governments own the rest. Under the federalist regime any unwanted protesters or journalists could be deemed to be trespassing or causing public disorder at the drop of a hat, and the constitution’s bill of rights would be completely worthless in protecting them.

Posted by Alexander Fayard at 10:42 PM