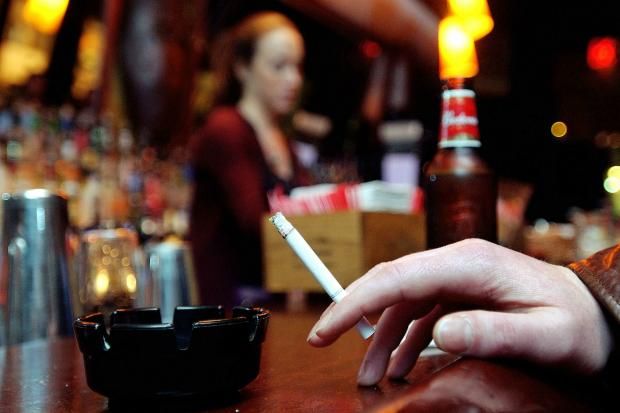 A common argument for forcing restaurants, bars, and casinos to kick smokers out of their establishment is that it protects the workers from secondhand smoke. This might be a valid contention if it weren’t for the inconvenient fact that restaurant, bar, and casino workers are significantly more inclined to smoke than the general population. In fact, according to the CDC they are about 1.5x more likely to smoke than workers in other industries.

Anyone who has ever worked in a restaurant would intuitively know this. This is what the waitstaff do on their breaks. Saying your intention is to protect them from secondhand smoke is kind of worthless if they’re already inhaling first hand smoke at a significantly higher rate than the customers they serve.

Of course this isn’t an endorsement of cigarette smoking or any other kind of smoking for that matter. I am personally against smoking; putting tar in your lungs is never a good idea. Smoking is bad M'kay, but you are the only one with a moral claim to your own body; only you have the prerogative to decide what you put in it. In a state of affairs where unhealthy behavior wasn’t subsidized at the taxpayers expense, the grim consequences would deter such behavior. Despite its posturing and moral grandstanding on the issue of smoking, the government, through its department of agriculture still subsidizes crop insurance premiums for tobacco farms, and until 2004 the government fixed tobacco leaf prices to guarantee high profits to farms.

Posted by Alexander Fayard at 8:49 PM