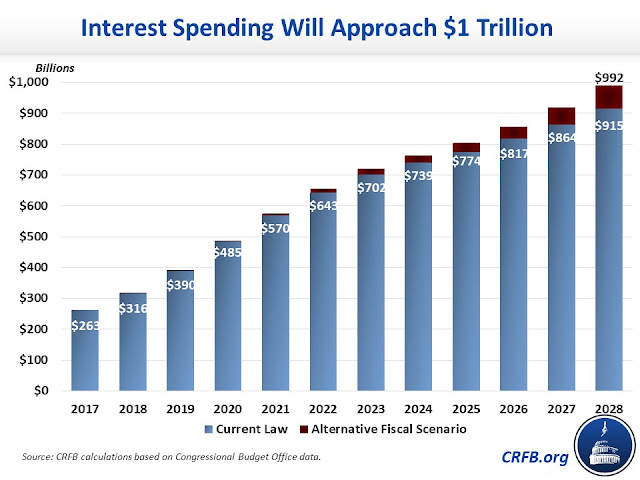 'As long as mankind continue to pay "national debts," so-called -- that is, so long as they are such dupes and cowards as to pay for being cheated, plundered, enslaved, and murdered -- so long there will be enough to lend the money for those purposes; and with that money a plenty of tools, called soldiers, can be hired to keep them in subjection. But when they refuse any longer to pay for being thus cheated, plundered, enslaved, and murdered, they will cease to have cheats, and usurpers, and robbers, and murderers and blood-money loan-mongers for masters.'

-Lysander Spooner, No Treason: The Constitution of No Authority VII

Although the federal government cannot technically become insolvent; there are other undesirable consequences to exceeding its constitutional duties. While the national debt is not exactly like a household debt, since the federal government is technically a “sovereign currency issuer”, it still has to be paid with interest like a household debt and that interest payment is growing rapidly. In fact, according to CBO net interest on the national debt is the fastest growing portion of the congressional budget. CBO estimates that net interest on the national debt will grow by 248% over the next decade, much faster than GDP growth over the same time period (55%) or any category of congressional spending including healthcare spending (96%).

It should be remembered that discretionary spending, currently about $1.3 trillion, is only a fraction of the annual congressional budget; in fact, it is less than half the budget. Most of the budget is non-discretionary or mandatory spending that congress does not get to approve on an annual basis. Any attempt to “balance the budget” through spending cuts or tax hikes would be futile.

Posted by Alexander Fayard at 7:46 PM