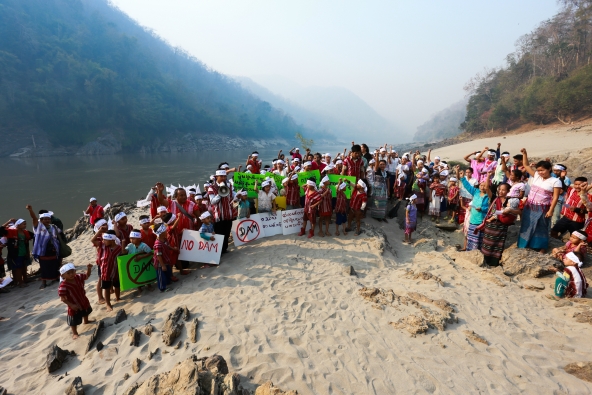 Sources:The Most Inconvenient Truth of All, Stanford Social Innovation Review


One of the unintended consequences of the rush to create renewable energy sources is the displacement of indigenous and traditional societies from their ancestral lands, in large part because renewable energies require more land consumption. A Survival International Report from the previous decade highlights some of the ways in which authorized green energy projects have escalated human rights abuses and led to the erosion of land rights. For example, much of the land used to produce bio-fuels has been seized from indigenous societies in South America and South East Asia. The expansion of bio-fuel production is estimated to displace some 60 million indigenous people around the world, especially tribes in the Amazon such as the Guarani of Brazil who have already lost land to sugarcane plantations that are used in the production of ethanol. Hydroelectric dam construction has had a similar impact on indigenous tribes by flooding their ancestral lands and cutting them off from vital resources. Efforts to curtail deforestation and carbon emissions through carbon credit schemes, in which developed countries supposedly encourage developing countries to protect their forests by buying credits that represent carbon storage to offset their own carbon emissions, have also curtailed the land rights of indigenous tribes. These carbon credit schemes, known as Reduced Emissions from Deforestation and Forest degradation (REDDs), have incentivized developing countries to restrict the hunting and foraging activities that indigenous tribes depend on for sustenance and have often led to the complete eviction of indigenous tribes from their ancestral lands.

As I noted in a previous post, much of the concern about carbon emissions and environmental degradation could be alleviated by simply recognizing and protecting land rights. Research conducted by the World Bank unsurprisingly found that allowing local communities to exercise stewardship over their own land is associated with significantly lower rates of deforestation than giving government agents exclusive control. Extractive industries (i.e. oil, gas, mining, & logging) depend on access to other people’s land just as much as renewable energies. Allowing them to use this land without the prior and informed consent of landowners and community stakeholders is kind of a defacto subsidy. Not allowing them to railroad their way onto other people’s land would undoubtedly cut down on their production.

Posted by Alexander Fayard at 5:25 PM