Growing Number of Street Children in Our 'First World' Country 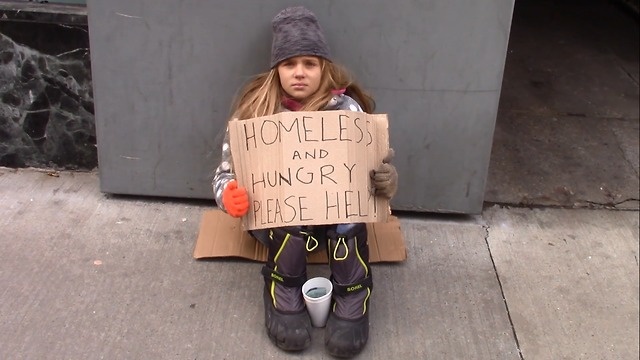 
Something you would only expect to find in corrupt developing countries like Brazil and Honduras is becoming an epidemic here in the good ole USA. There are about 1.4 million homeless school age children throughout the U.S, but homeless school children and homeless people in general are concentrated in a handful of large metropolitan cities. 51% of all homeless people are in one of the fifty largest U.S. cities and almost half of them are in New York City or Los Angeles: two cities that account for 24% of the nation’s homeless population. 51% of chronic homeless occurs in only three states: California, New York and Washington. Washington state identified more than 40,000 homeless students during the 2016-2017 school year, a 30% increase from four years prior. Another report found 15,000 homeless children in Tarrant County, TX alone, and this is just the tip of the iceberg. Homelessness is surging in almost every major metropolitan city. In Los Angeles County, homelessness has increased 12% despite increased spending on social services and supportive housing. In New York City, nearly 115,000 students, about 1 out of 10 students, were homeless during the 2017-2018 school year. The state of California alone had about 270,000 k-12 homeless students during the 2017-2018 school year, 72,000 of whom lived in Los Angeles County. The vast majority of them live with friends or relatives, but some 5,320 students in Los Angeles county are unsheltered. Almost half of the homeless population of San Francisco is also school age children; 3,200 of the 7,500 homeless people in San Francisco are children.

Homelessness is not caused by mental illness or substance abuse; neither are universal among homeless populations. Only 35% of the homeless population, not even a majority, has a substance use disorder and as I explained in my previous post on the link between Chronic Homelessness and Mental Health, mental illness is just as much a symptom as it is a risk factor because the stress experienced during homelessness itself exacerbates vulnerabilities to developing mental disorders. People tend to equate homelessness with the people they see begging on street corners when most homeless people are in fact invisible to the public sleeping in city shelters, in their cars, or in other temporary arrangements. Incarceration will not only not solve homelessness it is also more expensive than supportive housing and other band aid policies that do not solve the underlying economic problem.

The Systemic Causes of Homelessness

Much of the cause of poverty and misery in these large cities have the same cause: unjust land tenure. As job markets expand and economic opportunities grow land values also soar and rents consequently consume wage growth. For instance, from 2011 to 2017, rent for a one bedroom apartment in Los Angeles County increased by 67% while median household income only grew by 23% over the same period. Land values along the California coast are the highest in the country. While residential land in the average U.S. metro is only worth $20,000 per acre in the average Coastal California metro it is worth $150,000 per acre, seven and a half times the national average, and in San Francisco, a city notorious for unaffordability, the average acre is valued at about $400,000, about twenty times greater than the national average. To put this in perspective the average American home, with one acre of land, is only valued at $180,000 which means the average acre of land along the coast of California is almost as much as the average American home, and the average acre of land in San Francisco, just the land itself, is more than twice as much as the average American home, Of course, space that expensive in population dense areas is sold by the front foot, for commercial use, or square foot, for residential use, instead of by the acre as it would in suburban and rural areas; but it puts the problem of rising rents into perspective. Land values are capitalized in the selling price of homes making California homes much more expensive than throughout the rest of the country.
Land rent is so high that the cost of physically building homes only account for one-third of home prices along the coast of California, while in middle America or even inland California, where land is significantly cheaper, home prices are at or close to the physical cost of construction. However, land scarcity is not the only problem driving up rents and home prices in coastal regions. Combine natural land scarcity with the artificial scarcity created by slow construction permitting process, maximum density requirements (i.e. rules for minimum unit size) , exclusionary single-family zoning, and regressive taxes (e.g. sales and property taxes) and you have the perfect recipe for pricing people out of the housing market and creating homelessness. For instance, the average development fee for each single-family home in California is $22,000 while the national average is only $6,000, and the cost of physically building a single-family home in California is $50,000 to $75,000 higher than the national average. These rules and policies act as a catalyst for land scarcity and simply allow landlords and mortgage lenders to appropriate higher rents (or mortgage interest) at the expense of working class people. If the demand for new housing continues to far exceed the supply of new housing, due to natural and artificial barriers to new development, the cost of housing will grow faster and more people will fall through the cracks. In Los Angeles County, a 5% rent increase is estimated to create 2,000 more homeless people.

Not everyone feels the pinch, but more people will. California households in the bottom quartile of the income distribution already spend, on average, 67% of their total income on housing; in comparison, the average American household only spends 25% of their total income on housing costs. This has the devastating effect of eroding their savings and chances for social mobility. When you take other household necessities into consideration (e.g. food, healthcare, transportation, utilities), low income renters have very little left to save for a single-family home or spend on continued education, even with extreme budgeting, and will have nothing left in savings if rents continue to rise more than wages, creating a perpetual poverty trap. This may explain why California has a significantly lower rate of home ownership (54%) than the rest of the country (64%).

Of course, as many people are now realizing, coastal cities should build more housing and denser housing to accommodate population growth and offset high land values, but this only addresses half the problem. Market rate housing would continue to be unaffordable for a large portion of the population even if you scraped zoning entirely like Houston. The other half? Shift the local tax burden from new construction and redevelopment to land values, reducing the penalty on the former, by reducing both taxes and cost of land, and recapturing the value generated by public services and infrastructure for public services and infrastructure. In the meantime, coastal cities should adopt tenant protections, such as just cause eviction and 60 day notices, to level the power imbalance between landlords and tenants. As mentioned in Predicting and Preventing Chronic Homelessness, those most at risk are single male low wage workers, particularly African Americans; cities should provide immediate re-employment in the public sector, in lieu of the plethora of current social services, when low wage workers are laid off to prevent them from spiraling into chronic homelessness.

Posted by Alexander Fayard at 11:22 PM