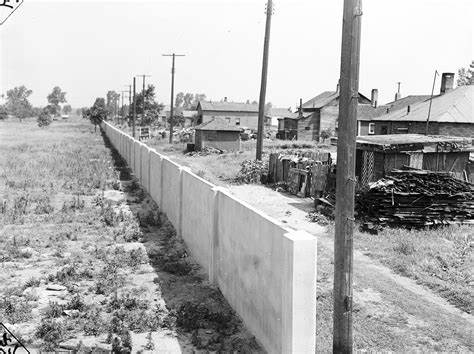 
There is no part of American real estate history that is not violent and racist even in the present. As I noted in A Land Value Tax is The Only Right Way to Pay Reparations, two key Supreme Court decisions have all but obliterated property rights for the average joe.

The Supreme Court’s decision in the 1954 case Berman v. Parker set a precedent for allowing cities to use eminent domain for private development by perverting the doctrine of public use into “public purpose.” The Court’s decision in the 2005 case of Kelo v. City of New London put the final nail in the coffin of property rights interpreting public purpose to now mean “public benefit” which could be any purported financial windfall such as increased tax revenue or claims of job creation

How American communities became segregated on the basis of race is another narrative cloaked in myth and just so stories. Of course, we understand how the south became segregated through Jim Crow legislation or at least the limited hangout version we are taught in school. De facto segregation in New England and the West Coast is considered somewhat of a mystery. The prevailing theory, among those who care about the issue, is that white people simply relocated whenever too many minorities moved into their neighborhood (white flight) or that banks took it upon themselves to not underwrite mortgages in areas with too many minorities (redlining). Progressive narratives tend to either downplay or completely ignore the role public policy, at all levels of government, had in segregating non-southern cities. Perhaps these public policies are omitted for ideological reasons so blame can be pinned on a non-existent free market boogeyman rather than turn of the century Progressive politicians and idealist who wanted to mold society according to their racist and eugenicist beliefs. The first endeavor to segregate metros at the turn of the century was through racially restrictive zoning ordinances.

The Racist Origins of Zoning

The first zoning ordinances not only separated commercial and residential land use but also designated white and colored blocks or zones within residential areas. Baltimore was the first city to adopt these measures in 1910. Soon after, every major metropolis south of Baltimore adopted zoning ordinances that segregated white and black residential areas until such laws were shuddered by 1917 Supreme Court decision in Buchanan v. Warley. However, this was not the end of racial zoning. After the Buchanan decision, southern cities turned to professional northern planners to help craft zoning ordinances that segregated neighborhoods by race without explicitly mentioning race. Cities like Richmond, VA began to designate certain areas as ‘negro and white residential areas’ without using their police power to enforce the designation; instead, the designations were used as guidelines for public and private development. This was coupled with comprehensive race based planning that provided public services previously denied to black communities. In 1925, the city of Birmingham, AL enacted a new set of zoning ordinances ‘to protect the property holders against manufacturing plants and comer grocery stores which tend to spring up promiscuously about the city and to restrict the Negroes to certain districts.’ The city used its police power to issue or revoke building permits to prevent housing set aside for blacks being built in tandem to a white neighborhoods. Charleston, SC hired planning consultant Morris Knowles to devise a plan that delineated separate residential districts for blacks and whites without mentioning race in the official zoning nomenclature. Knowles' plan created an old and historic district with the goal of removing several thousand black residents who still lived there in 1931. Most southern cities abandoned racial zoning in the 1930’s and looked for other means of enforcing segregation. Southern cities began to use street and highway planning to erect physical barriers between communities in the 1920s and started creating public housing projects legally designated for blacks.

As Black Americans began to migrate North, city planners there began to adopt measures that circumvented the restrictions imposed by the Buchanan decision. For example, many neighborhoods in Boston and other New England cities began to enforce racially restrictive covenants. The covenants were legal agreements, enforced by neighborhood associations or real estate boards that prohibited all current and future owners of property within the covenant from selling or leasing to black people and other people of color on the penalty of forfeiting the property.

This practice was upheld by the 1926 Supreme Court decision in Corrigan v. Buckley. Afterwards, it became so popular nationwide that by 1940 80% of residential properties in Chicago and Los Angeles were tied down in racially restrictive covenants.

The Origins of Redlining

Municipal and corporate land policies weren’t the only forces keeping communities segregated. Federal housing policy, starting with the FDR admin, financed the creation of racially segregated housing projects and suburbs during the great depression. Before the depression, state and federal law prohibited banks from making long term mortgages for more than half the value of a house so banks required homeowners to make a down payment equivalent to at least a quarter of their home value and pay down the mortgage in six years. During the depression, FDR heightened federal oversight of the real estate industry to reduce foreclosures and resolve a severe housing shortage in urban areas. In 1933, FDR replaced Hoover’s Federal Home Loan Bank with the Home Owners Loan Corp that financed some $3 billion in mortgages for Americans who fell behind on their payments. To supposedly minimize risk, the HOLC adopted an older NYC practice of assessing mortgage applications by rating the socio-economic characteristics of the residents in an applicant’s neighborhood, including the race of the residents, instead of the applicant’s personal credit history. Neighborhoods were marked A through D and given a color code on maps. Recently constructed suburban neighborhoods where white professionals lived were denoted as “A” neighborhoods, considered the most credit worthy, and outlined in Green. Inner city neighborhoods with older construction and black residents were denoted “D” neighborhoods, not considered creditworthy, and outlined in red. Thus, the practice of redlining was spread across the nation through federal policy. The FDR admin also created the Federal Housing Administration, in tandem with the HOLC, to provide up to $20,000 in mortgage insurance, per household, to banks that loaned money to FHA approved properties. Like the HOLC, the FHA underwriting manual also used race and ethnicity as eligibility criteria.

Thus, both the HOLC and FHA heavily subsidized the development of homogeneous, white single family home suburbs while simultaneously denying the same mortgage assistance to black and minority communities in the inner city until they made an about face with the passage of the Fair Housing Act of 1968. By then government enforced racial discrimination had already been deeply entrenched in the real estate industry so much so that there are still remnants of it today. Single family zoning and minimum lot size requirements for multifamily housing are holdovers from this era that have precipitated the current affordable housing crisis. In pull the ladder up behind you fashion, many upper and middle class suburbs, that would not exist without the New Deal welfare state, use their zoning boards to stifle low income housing.

Only 19 cities or towns allow housing with three or more units to be built without requiring special permits, according to a 2013 review by Trinity College’s Cities, Suburbs, and Schools Project and the Connecticut Fair Housing Center. Twenty-five municipalities explicitly prohibit such housing and 123 require a special town permit.

Even towns that allow the development of multifamily housing, without a special permit, make it financially infeasible by requiring 20 to 70 acres of land and limiting the number of units and bedrooms that can be built. As a result, lower income and mostly minority residents of Connecticut are relegated to towns with the worst schools and public services and some end up homeless as a result of policies that create rackrents

Ashana Cunningham, a 33-year-old mother of three, lives 9 miles from Westport’s posh downtown. Each workday, she takes a bus from a homeless shelter in Bridgeport, where she lives with her family among a landscape of abandoned factories, run-down houses and trash-lined streets to her job in a suburban cornucopia a few miles away. She tends to children from privileged families at a pricey day care in Fairfield. Two days a week she works a second job at Family Dollar. This is not the life Cunningham imagined. She earned an associate degree to become a medical assistant but has never made more than $14 an hour. She and her wife struggled to pay $1,200-a-month rent for a small Bridgeport apartment, and then her wife became disabled and could not work. A car crash further complicated their lives. Cunningham was injured and left without transportation — and, ultimately, out of a job. By the time she found the daycare job, which pays $12.50 an hour, the family was living in the shelter, where the smell of bleach lingers and bachata music from a neighbor’s apartment pulses through the walls. Her second job as a cashier pays $11 dollars an hour.

Ashana and her family aren’t alone in this predicament. A growing portion of the homeless population are coming from the ranks of those employed. Research by the Urban Institute estimated that about 25% of the homeless population is fully employed and between 40% and 60% are between full-time and part time gigs. In Washington state, an estimated 22% of homeless single people and 25% of homeless adults in families are gainfully employed. In NYC, an estimated 34% of homeless families in the city’s shelters have at least one employed adult. The shortage of low income housing and hyperinflation of urban real estate prices means that being gainfully employed is no longer a guarantee of even meeting your basic needs. We are quickly approaching a breaking point where people are growing privy to the lie of meritocracy and the truth of political patronage.

Posted by Alexander Fayard at 7:49 PM No comments: